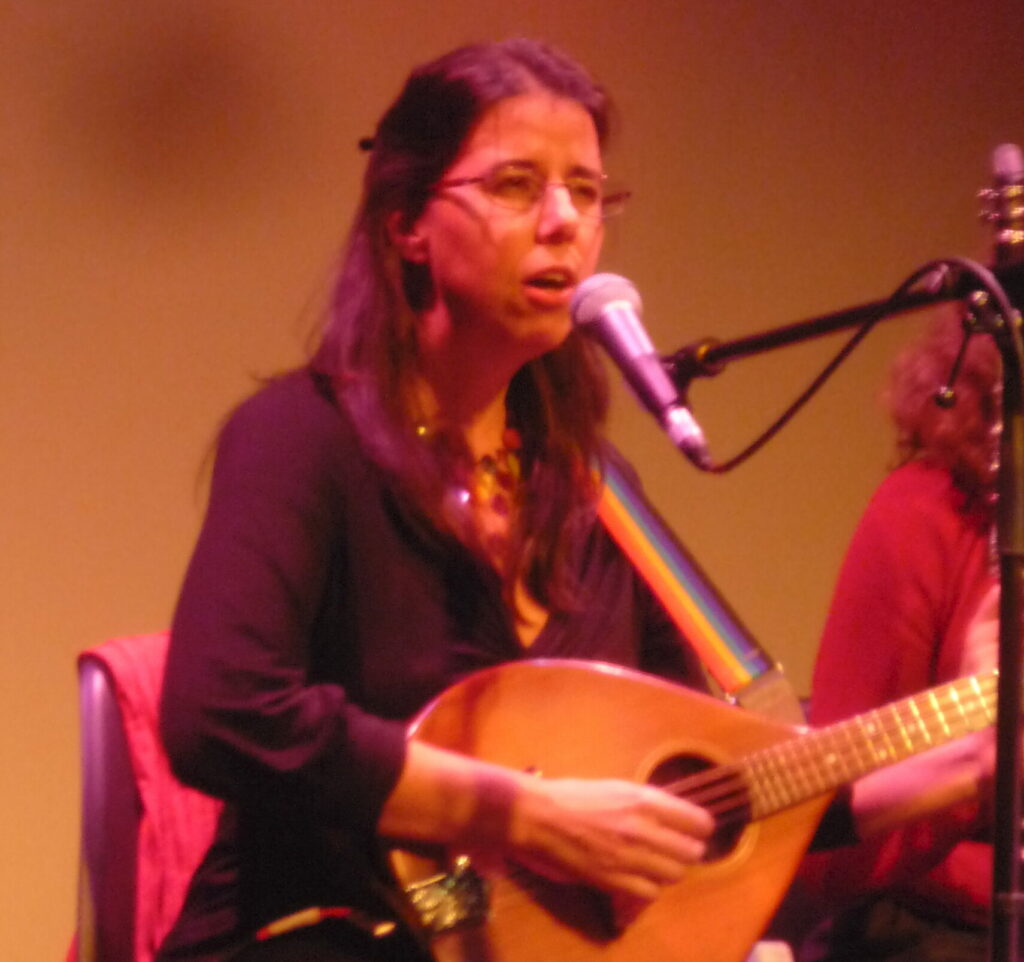 On stage at The Pegasus Theatre, Oxford

Jackie Singer is a singer-songwriter who plays violin, mandola and shruti box.  She began her musical career in the 1990s as part of the festival band Jabberwocky, who released an album, Mimir.  Following that she released a solo album She Is Gold (2003) and toured locally.

“liltingly mellow, peaceful and serene . . .like being in a sea of gold” Audience at She Is Gold launch.

Click the play button below for a listen to the title track from the album.

She Is Gold – “Sometimes, all you can do is lie down on the earth, and wait for the river to come through”

And here is one to join in with: Child of the Earth

Only a few copies of the physical CD remain!

BUY a signed copy of She Is Gold.

Jackie was a founder member of all-female nature-inspired folk trio Kismet, along with Melissa Holding (voice, accordion, piano, koto) and Kath Lucas (voice, clarinet, whistles).  Kismet have been together since 2001, adding guitarist Jon Fletcher (guitar) to the group in 2009.  Together they released four albums, staged numerous concerts and performed at festivals including Oxford Women’s festival, Oxford Folk Festival and Kicking the Bucket (Festival of Living and Dying).  Read more about Kismet.

Here is Seed, one of my tracks from our latest album, Feast.

As a solo artist, Jackie was commissioned by the Earth Trust to write a song for their River of Life Festival (2014). She has written  and performed the music for Oxford Youth Dance show The Lorax (2006) and contributed to Café Reason’s Butoh dance performances as an improvising musician (The Forest That Sailed Away 2000).

In 2014 Jackie was chosen by Improbable Theatre to be the musician alongside 4 other performers in  Permission Improbable – a ground-breaking, all-female improvisation project, with 6 shows at Battersea Arts Centre, recorded for the British Library.

In recent years, Jackie has been writing sacred music in the form of chants, accompanied by Shruti box (drones).  She shares these in her courses for women (Embodying the Goddess) and has been invited to perform them at meditation gatherings in the UK, Ireland and the Netherlands, performing to audiences of 200 people at each.  During 2020, she sang on YouTube live-streamed meditation teaching videos with 1.6K views across the world.

To discuss a musical performance or commission, please contact me.

To hear more of Jackie’s music, find her on Soundcloud.