Here we are, in an upstairs room at Oxford Playhouse: a circle of 20 adults, mostly women, and inside our circle are soft carpet, beanbags, babies.  On our publicity is a delicate tissue-papercut of a pangolin, an endangered mammal, whose soft centre is protected by its scaly armoured back.  ‘Fierce protection’ are the words chosen by one woman to describe her work as a mother and an activist.  The vulnerability of the children at our centre requires it. 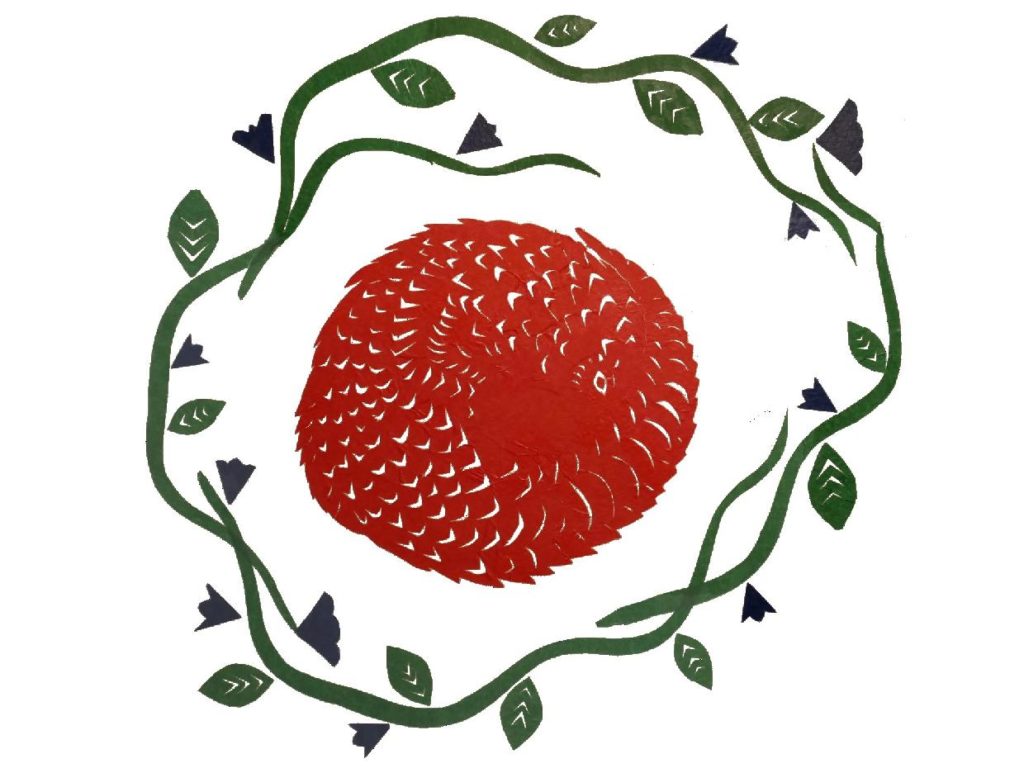 Holding Against Extremes is an exhibition of work by the Oxford hub of Mothers Who Make.  Because Mothers Who Make encompasses creatives of all kinds, we also hosted a performance and discussion to launch the exhibition.  So last Wednesday there were songs, poetry readings, descriptions of organisations and activism amidst the portraits, textiles, drawings and poetry on the walls.  Immediately the pieces began to speak to one another.   Mary Erskine (AKA Me for Queen) sang about swimming while pregnant – her intimacy with the unborn, her anxiety about the world outside – in front of Sarah Budzier’s exquisite hand-knitted mother and baby-sized jumpers, a mother’s love made tangible in each patient stitch. 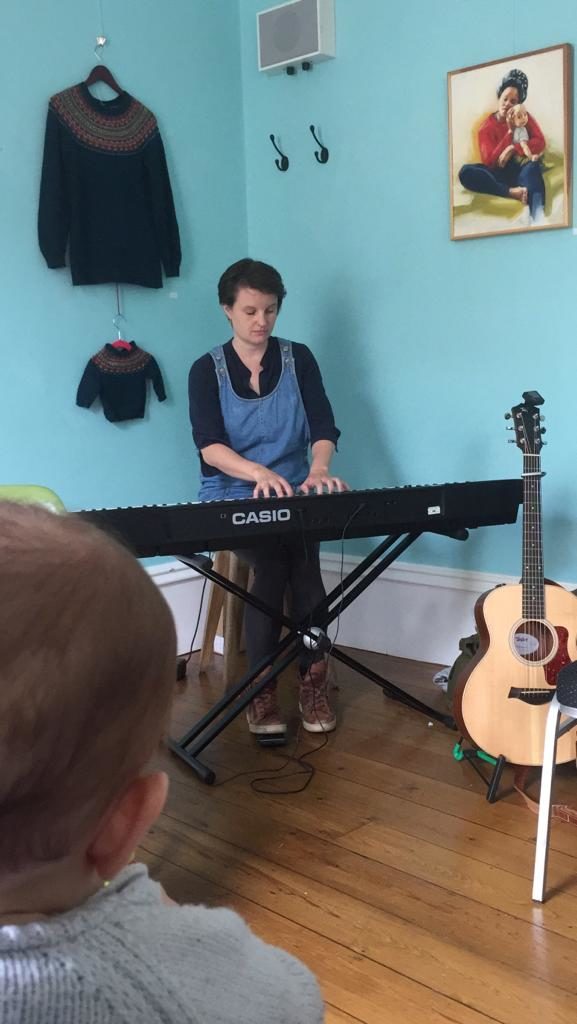 Robin Danely’s luminous parent and child portraits brought deep tenderness into the room, a counter to Rowan Ryrie’s flashing crisp packet cut-outs of blue fin tuna, alerting us to the notion that by 2050 the oceans could be more full of plastic than fish. Josephine Rutherfoord created ‘Blastocyst & Birthstrike’ – itself a conversation between her silicon model of a flower-like embryo 5 days after fertilization and news of a current movement where women are choosing not to have children until politicians address the climate emergency.  Above that hangs my poem, Peaking, written during a time of choosing to conceive a child in a time of peak oil 14 years ago. 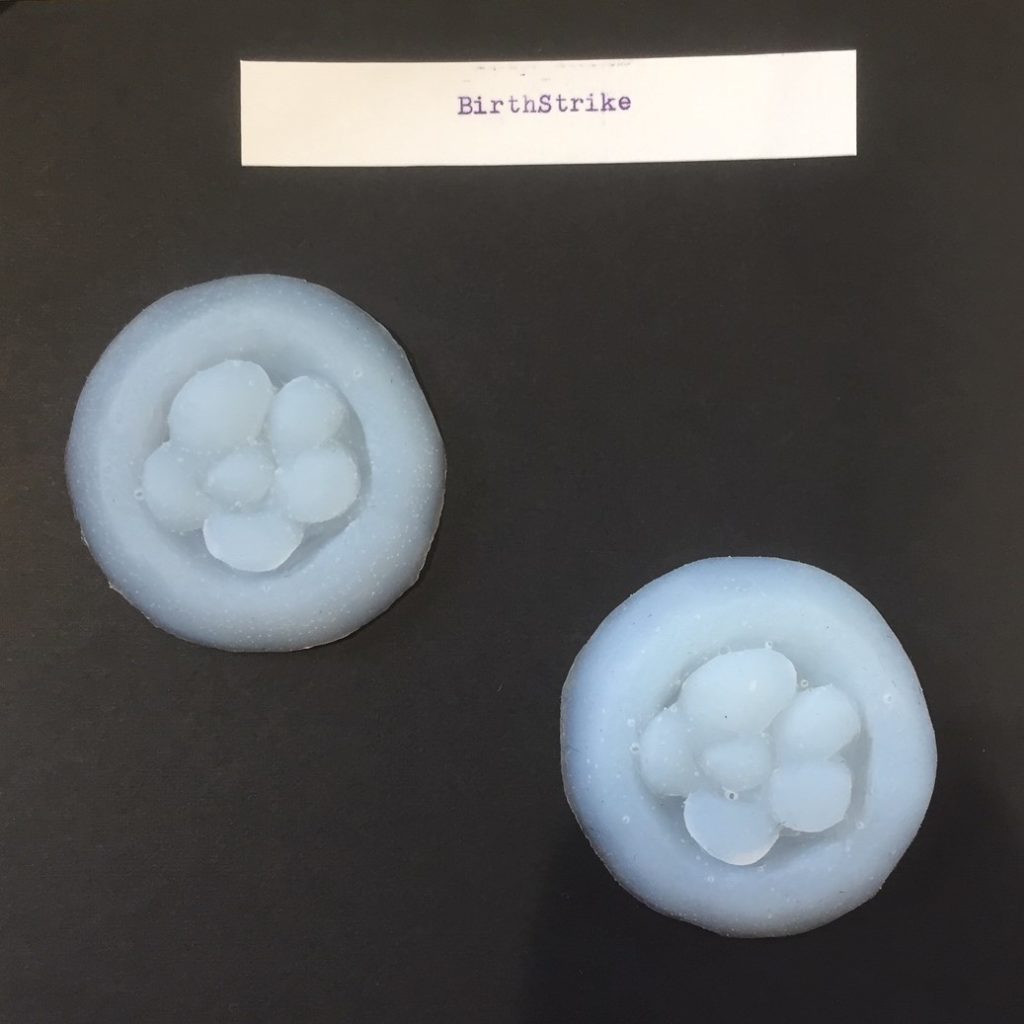 When Mary Livingstone read her recent poem, “What to do when the fear spills over”, a response to a talk given in Oxford last week by Jo McAndrews on How to Talk to Children About Climate Change, there seemed to be a vocal swell of outrage from the babies.  Then Jackie Oates soothed us all with a lullaby in which we could ‘dream without fear’.  We breathed deeply and the children settled into stillness.

The boundaries between art, activism and parenting began to fall away as Mim Saxl told us about her forthcoming art installation for Clean Air Day next Thursday 20th June. She is going to park a car in the Bonn Square, full of smoke on the inside, making visible the pollution experienced by drivers and passengers (many of them children) inside cars.  Since joining Mothers Who Make, Rowan Ryrie has created not only papercuts on environmental themes, but a whole network of climate activists Parents for Future. Well, what else is a creative and concerned human rights and environmental lawyer going to do with her maternity leave? 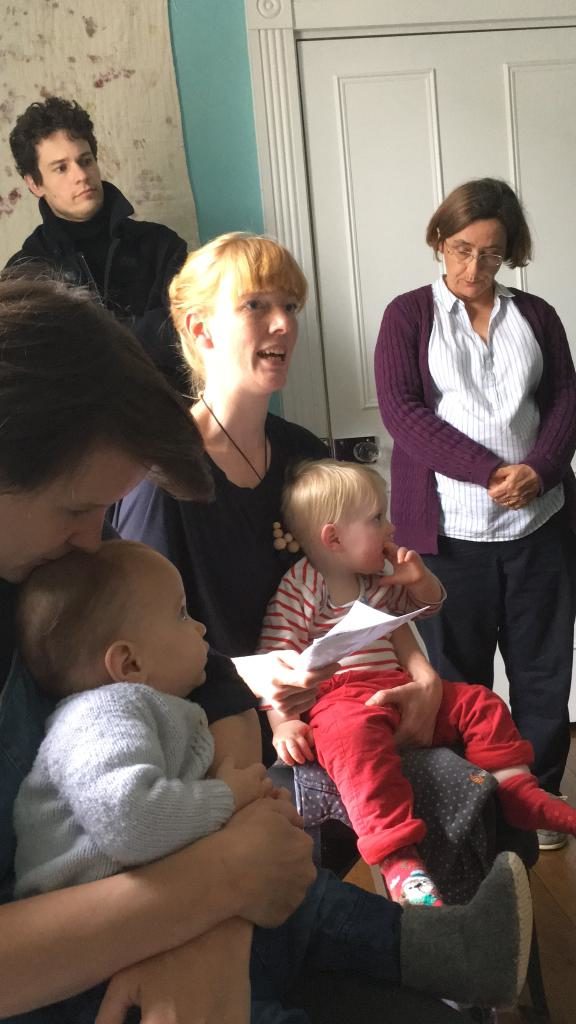 Sarah Mook described parenting as activism in itself, especially when we buck the system to stand up for our children’s needs.  She should know.  In order to support her very bright and autistic son during his G.C.S.E.s in these recent weeks, she has been bringing their dog in to sit at his feet during the exams.  A small act of resistance reminding us of a bigger truth: our physical connection with the more-than-human world matters deeply.

In between contributions, Emma Proud (coach and creator of Baby+Brain) invited us to think about what was emerging for us, and to talk to our neighbours, giving us space to let the work touch our hearts, and drawing us further into connection with one another.  One thing that was emerging for me was a sense of the thrust of Life, the bigness of it, way out of any human control.  I held the silicon model of the embryo, seeing cells multiplying in a way that creates beauty.  I watched a child in the room taking her first wobbly, proud steps, not because anyone told her to, but simply because Life flows through her.  And in that moment, I felt hope that what we are facing in these times is perhaps not Extinction but Evolution.  Whatever that looks like.

“Make room for not knowing what comes next

The ground will be there.” 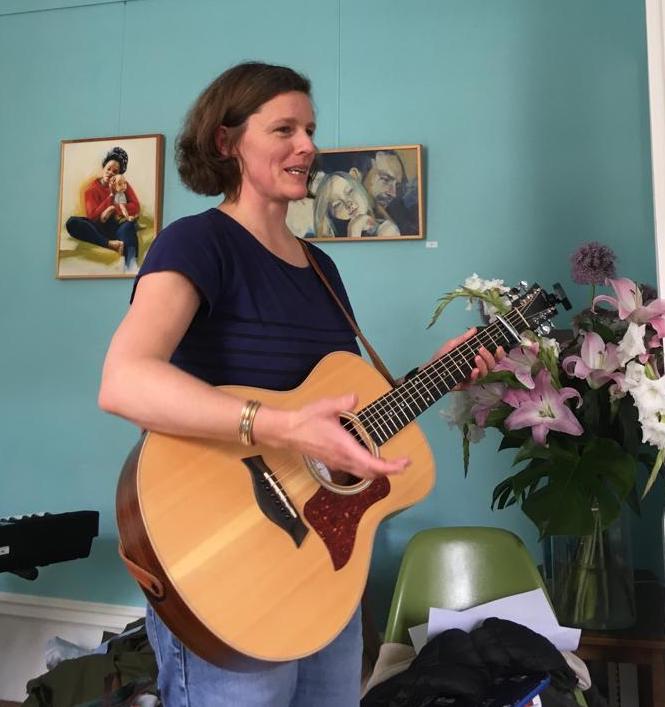 What was also emerging for me was a clearer understanding of the systemic change that can happen when we bring our full selves together.  People spoke about ‘stepping in with both feet’, about ‘gut feelings’ and ‘heartfelt’ responses.  No-one was hiding behind a veil of professionalism or objectivity.  This is at the core of the whole Mothers Who Make movement, that we value both the work (our fullest gift to the world) and our mothering (our deepest humanity) and don’t separate or hide one from the other.  Imagine how different our world would be if we conducted our politics with babies in the room (more lullabies, fewer articulations of fear, or you wouldn’t be heard for the cries).  Or if company board rooms were places where the voice of the heart could be heard. 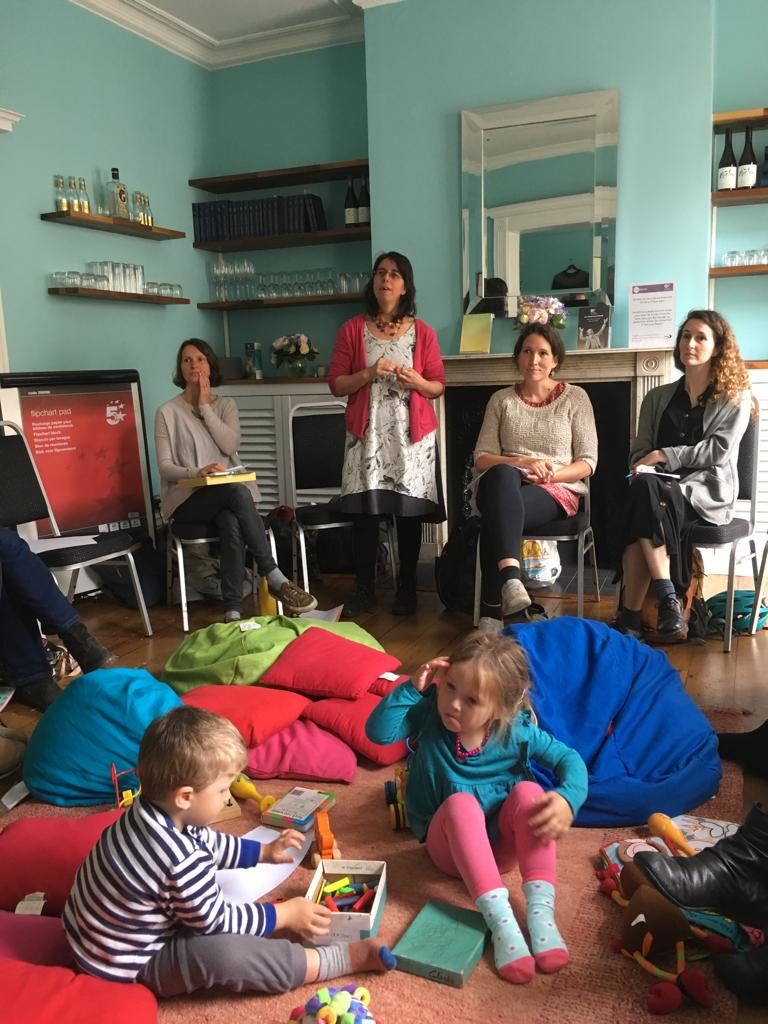 This isn’t necessarily about having more women in positions of power.  It is about a feminine consciousness, what Nobel Peace Prize Nominee Dr Scilla Ellworthy calls ‘FemmeQ’.   As it happens (there are no coincidences), I saw Scilla speak on Monday evening at the inaugural meeting of OWLS – Oxford Women Leaders network.  The values Scilla names as essential elements of feminine intelligence were all present in abundance yesterday: Compassion, Regeneration, Intuition, Interconnectivity and Listening.  This was feminine leadership in action.  There is something about Art which seems intrinsically part of this too.  Art that is intuitive, compassionate and connecting (not alienating, oppositional, ugly) is humanity at its very best.  If we are looking for the kind of change that could bring about a true revolution, of a size that is up to the challenge of addressing the causes of nuclear war, environmental degradation and potential societal collapse, this is it.  It may not look like much from the outside, but neither does grass, until it takes up the concrete.

Near the end of the event one of the toddlers grew restless and his voice was heard: “I want to go home now.”  Me too.  I want to go home to my senses, to a feeling of safety in my body, even when I’m out in the world.  Home to a sense of wonder in the miracle of life and trust in the mystery of what it is becoming, despite all the terrifying headlines.  And home to my tribe – the people who are sensitive and courageous enough to meet me there.  I feel closer to this today than perhaps I’ve ever felt.

I am leaving with a bodily sensation of the groundswell of this feminine leadership, which feels like an upward spiral, gathering energy and growing in confidence as it rises.  We do not know where it is leading us, but I am hopeful.  We make room for not knowing what comes next.  We make another stitch.  We send another email.  We take a step.  We trust the ground will be there.

Holding Against Extremes – Mothering and Making in a Time of Climate Emergency is in the W Lucy Members Room at Oxford Playhouse until 2nd July.

Mothers Who Make is a national network supporting any kind of mother and any kind of maker.  The Oxford hub meets monthly at Oxford Playhouse, usually on a Tuesday 12.30pm – 2.30pm.  For more info please email learning@oxfordplayhouse.com

The post Holding Against Extremes – Mothering and Making in a Time of Climate Emergency appeared first on The Hummingbird Lodge.

This site uses Akismet to reduce spam. Learn how your comment data is processed.